Two teams will go on to the global competition in Kansas City, Mo., in May. The elementary team, The Expired Doritoes, took second place, and the high school team, Thick Gucci Chickens, claimed first.

They are two of about sixty teams (out of over 800) that will be representing Colorado in what is known as the “world’s largest celebration of creativity.”

The Expired Doritoes will be competing in the engineering challenge, Monster Effects. The kids had to build a structure within certain specifications that was as light as possible and held up to 500 pounds.

They then had to test the structure during a presentation in which the appearance of a monster has surprising results. The appearance of the monster had to be accompanied by a technically enhanced special effect.

This team has a wide range of personalities and experience. The kids were able to identify each other’s strengths and, over the past five months, really grew together as a cohesive team to solve this challenge.

Their ability to use individual strengths as a team and communicate well also launched them into first place during the instant challenge part of the competition at both regionals and states.

The high school team chose the scientific challenge, Medical Mystery, to solve. They had to research, create, and present a story about a medical condition that affects the human character. The team had to include a physical representation of the character being affected by the medical mystery. This element was being scored on technical design and innovation. 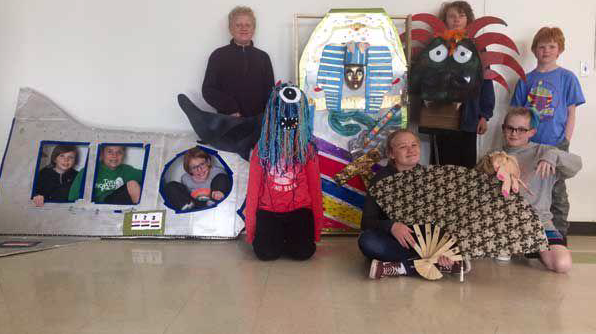